For many years, Dick and Judith Knott Tyler gave talks jointly. After being married and working together for 50 years, their lives and efforts were intertwined. However, after Judith's very unexpected death, Dick continues to share their passion for hellebores and their use in making beautiful shady gardens. 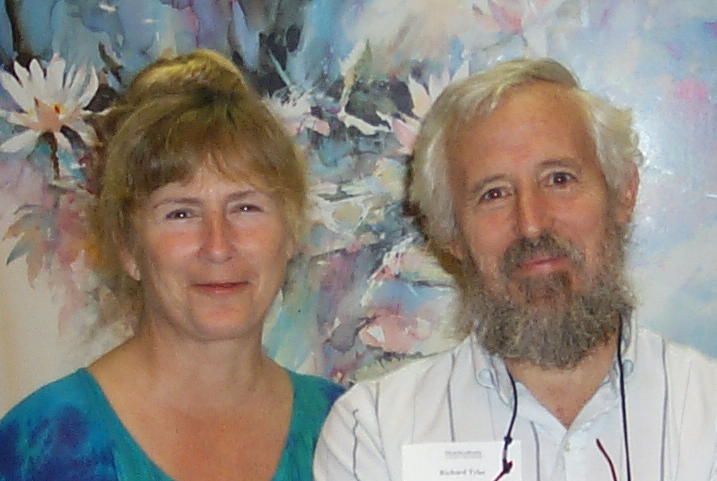 TITLES OF SOME OF MY PRESENTATIONS:

Gardening in the Shade; Staying out of the sun is good for you and your garden, using shade plants for year round interest.

Gardening with Hellebores; How to use Hellebores successfully in the garden, with emphasis on the many different species as well as hybrids and companions.

Growing Hellebores for Profit; A Nurseryman's overview with production tips, for trade shows and plant conventions.

Using Fragrance in the Garden, featuring plants which grow and bloom in the Southern US.

Hellebores Today; what's New and Exciting, concentrating on the new hybrids between species as well as what's happening with Lenten Roses.

Creating a Meadow Garden; Making and maintaining a sunny meadow, from our experience making the Meadow Garden at Pine Knot Farms.

Helleborus species for American Gardens; Growing and using species hellebores in the garden, combining them with other plants for best effect.

Making Chicken Salad from Chicken Sh*t; Building, planting and furnishing a garden using the imagination rather than the pocketbook.

2003 A Hellebore Odyssey; Photos and Tales of Visits with Top Breeders in UK, the Netherlands, Belgium and Germany.

Co-owners of Pine Knot Farms, a retail, wholesale and mail-order nursery in operation since 1982 specializing in Hellebores and shade garden plants. Developed the extensive Pine Knot Farms display gardens including shady woodlands, a large sunny meadow, rock garden, wetlands, ponds, and perennial borders. The Tyler's are former Co-curators of the Garden of Winter Delights at the J.C. Raulston Arboretum in Raleigh, N.C. Travel annually on plant explorations to venues including the United Kingdom, Europe, and the Balkans.

Dick and Judith Knott Tyler have owned and operated Pine Knot Farms since 1982, two years after they returned to the US after living in Canada for eight years. The land where the nursery is located is part of a farm that has been in Judith's family for six generations. When the Tyler's returned to Virginia they were severely garden deprived and began producing plants to fill the borders that were being created before they finished building their house. Since their gardens are located in an eastern mixed deciduous forest, the primary focus soon became plants that would thrive in shade. Hellebores soon became a focus and after a few years the collection became an obsession. Judith is the author, with C. Coleston Burrell, of the new Timber Press publication entitled Hellebores; A Comprehensive Guide which features many of Dick's remarkable photographs.

Dick, who was a building contractor for twenty years, is primarily responsible for the hardscapes and soil preparation. He has created several garden structures and is planning a gazebo/summerhouse in the newest area under construction. Being gifted with a natural talent to see the underlying structures he is the chief electrician, plumber, carpenter, mechanic and whatever else needs attention. A university course in Geology may have sparked his interest in stone, which is visible at the garden in the form of walls, steps and pathways. Dick began studying photography in the mid 1970's and is responsible for all the slides and photographs used for talks, website, and publications.

Judith studied art and was interested constructing mixed media collage/sculpture before their children were born. She feels that some of this energy has been channeled into creating gardens, since the forms and textures of plants can be layered to create a living sculpture that changes with the seasons. She is also responsible for the metal accessories that adorn several of the borders. Her early love of words and former literary aspirations has found an outlet in writing the Pine Knot Farms catalogue, articles and editing the website.

Both partners fell under the intoxicating influence of the genus Helleborus, began breeding the plants and their lives have never been the same. Each winter is devoted to travel and study of the genus. Travels have taken them throughout the US, UK, Europe and The Balkans searching for hellebores to add to their collection which includes all the species and innumerable hybrids. Their breeding work with the double forms has sparked national interest.
The Tylers are former co-curators of the Garden of Winter Delights at the J.C. Raulston Arboretum in Raleigh NC. Their gardens at Pine Knot Farms have been featured in Southern Living, Virginia Gardener, Virginia Living, Carolina Gardener, Heritage and Washingtonian magazines, numerous newspaper articles and on Martha Stewart's television program and magazine.